Selecting rows from a Pandas dataframe with a compound (hierarchical) index

I'm suspicious that this is trivial, but I yet to discover the incantation that will let me select rows from a Pandas dataframe based on the values of a hierarchical key. So, for example, imagine we have the following dataframe:

df looks as we would expect: 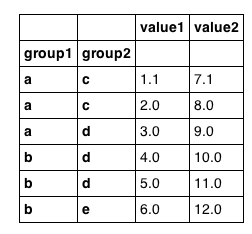 If df were not indexed on group1 I could do the following:

But that fails on this dataframe with an index. So maybe I should think of this like a Pandas series with a hierarchical index:

Nope. That fails as well.

So how do I select out all the rows where:

since group1 and group2 are indices. Please forgive my previous attempt!

To get at the second index only, I think you have to swap indices:

But I'm sure Wes will correct me if I'm wrong.