What are your best tips for debugging Python?

Please don't just list a particular debugger without saying what it can actually do.

You can use the pdb module, insert pdb.set_trace() anywhere and it will function as a breakpoint.

To continue execution use c (or cont or continue).

It is possible to execute arbitrary Python expressions using pdb. For example, if you find a mistake, you can correct the code, then type a type expression to have the same effect in the running code

ipdb is a version of pdb for IPython. It allows the use of pdb with all the IPython features including tab completion.

It is also possible to set pdb to automatically run on an uncaught exception.

Pydb was written to be an enhanced version of Pdb. Benefits?

Its goal is to provide all the niceties of modern GUI-based debuggers in a more lightweight and keyboard-friendly package. PuDB allows you to debug code right where you write and test it – in a terminal. If you've worked with the excellent (but nowadays ancient) DOS-based Turbo Pascal or C tools, PuDB's UI might look familiar. 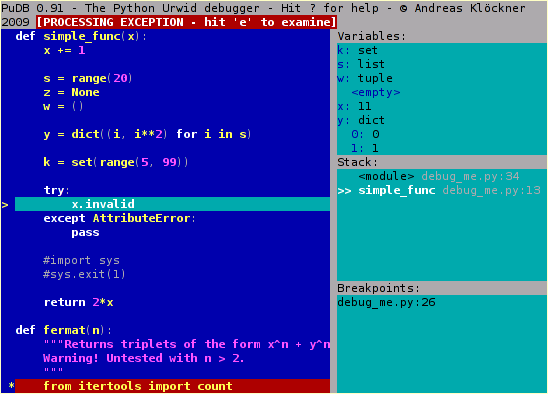