We are planning to write a highly concurrent application in any of the Very-High Level programming languages.

2) If a program contains threads, will a Virtual Machine automatically assign work to multiple cores (or to physical CPUs if there is more than 1 CPU on the mainboard)?

True multithreading = multiple independent threads of execution utilize the resources provided by multiple cores (not by only 1 core).

This has nothing to do with the language. It is a question of the hardware (if the machine only has 1 CPU, it is simply physically impossible to execute two instructions at the same time), the Operating System (again, if the OS doesn't support true multithreading, there is nothing you can do) and the language implementation / execution engine.

Unless the language specification explicitly forbids or enforces true multithreading, this has absolutely nothing whatsoever to do with the language.

Take Ruby, for example. Here are just some of its implementations and their threading models:

See also my answer to another similar question about Ruby. (Note that that answer is more than a year old, and some of it is no longer accurate. Rubinius, for example, uses truly concurrent native threads now, instead of truly concurrent green threads. Also, since then, several new Ruby implementations have emerged, such as BlueRuby, tinyrb, Ruby Go Lightly, Red Sun and SmallRuby.)

For Haskell, at least the Glorious Glasgow Haskell Compiler supports true multithreading with native threads. I don't know about UHC, LHC, JHC, YHC, HUGS or all the others.

For Erlang, both BEAM and HiPE support true multithreading with green threads.

2) If a program contains threads, will a Virtual Machine automatically assign work to multiple cores (or to physical CPUs if there is more than 1 CPU on the mainboard)?

Concretely, the Haskell runtime divides work be N OS threads, distributed over the available compute cores. These N OS threads in turn run M lightweight Haskell threads (sometimes millions of them). In turn, each Haskell thread can take work for a spark queue (there may be billions of sparks). Like so: 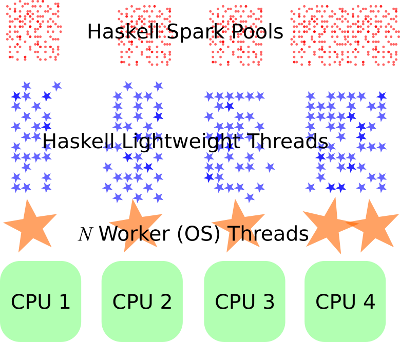 The runtime schedules work to be executed on separate cores, migrates work, and load balances. The garbage collector is also a parallel one, using each core to collect part of the heap.

Unlike Python or Ruby, there's no global interpreter lock, so for that, and other reasons, GHC is particularly good on mulitcore in comparison, e.g. Haskell v Python on the multicore shootout