Why is matplotlib plotting my circles as ovals?

Is there a way to get matplotlib to plot a perfect circle? They look more like ovals.

Just to expand on DSM's correct answer. By default, plots have more pixels along one axis over the other. When you add a circle, it's traditionally added in data units. If your axes have a symmetric range, that means one step along the x axis will involve a different number of pixels than one step along your y axis. So a symmetric circle in data units is asymmetric in your Pixel units (what you actually see).

As DSM correctly pointed out, you can force the x and y axes to have equal number of pixels per data unit. This is done using the plt.axis("equal") or ax.axis("equal") methods (where ax is an instance of an Axes).

You can also draw an Ellipse such that it is appropriately scaled to look like a circle on your plot. Here's an example of such a case:

resulting in this figure: 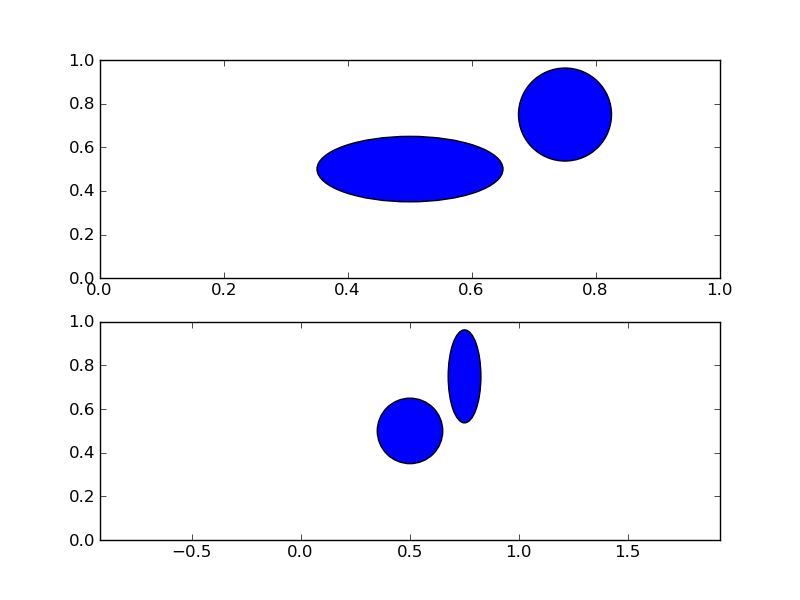 Alternatively, you can adjust your figure so that the Axes are square:

Notice how the second axes, which has the axis("equal") option, now has the same range for the x and y axes. The figure has been scaled so that the date units of each are represented by the same number of pixels.

You can also adjust your axes to be square, even if the figure is not. Or you can change the default transform for the Circle to None, which means the units used are pixels. I'm having difficulty successfully doing this at the moment (the circle is a circle, but not where I want it to be).

I believe the simpler thing to do is adding the following: